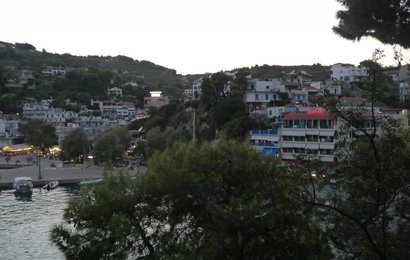 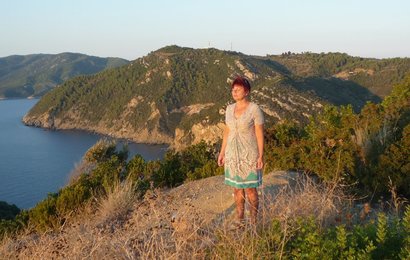 Alonissos is one of the islands pertaining to the Northern Sporads that has preserved its genius loci, and for the time being, it was spared the mass tours of visitors from all over the world. Since the time when it served as a transshipment point of the Cretan Minoans, its landscape hasn’t changed much; which has also been proved scientifically, and thanks to that, Alonissos became a part of a unique marine park. The National Marine Park of Alonnissos is the very first marine park in Greece, consisting of Alonissos island and six little surrounding islands. These small islands are the habitat of about 700 last Mediterranean monk seals, which  is another thing that makes Alonissos island exceptional. Many travellers claim there are the most beautiful sunsets to be seen in the whole Mediterranean. Alonissos is a long and narrow island with only a few roads. Its slopes are literally dotted with wild herbs, a fact that resulted in the establishment of the International Academy of Classical Homeopathy. Alonissos has been made for walking tours and trips. Most of its visitors are the Greeks, enlivening the island from the mid-June till the end of August. With its area of only 63 km2 and its 3 000 inhabitants, it is one of the smaller Greek islands. The island residents really care about preserving its pure nature, healing herbs and rare species.

There is never enough information about Alonissos Island. And who would be more familiar with the island than those who have spent there their holiday? We would like to ask you to dedicate a few minutes of your time evaluating your holiday on the island, telling us what you liked there and what Alonissos means to you, or possibly also to give us tips and advice that could be useful for other visitors who are interested in the island and are thinking of going there for holiday.

Patitiri, the island port and at the same time the capital city, is situated in a picturesque bay surrounded by pine forests. Its waterfront is scattered with many bars, cafés and tavernas with an extraordinary offer of mezedes made of fish and seafood. There is also a bus and taxi stand and rent-a-boat companies. From Patitiri, there are ferries setting out to the surrounding islands of Skopelos and Skiathos. Among the places of interest in the city, you can find the giant wine barrel, ‘patitiri’, the city was named after. In a house in the southern part of the bay, there is a private Museum of Costas and Angela Mavriki with a collection of folk art and traditional folk costumes and exhibitions focused on wine production, piracy and sea navigation. The ticket price usually includes a beverage in the local café you can enjoy together with the magnificient view from the terrace.

The town of Alonissos (Chora) was the capital till 1965 when it was devastated by an earthquake. Then its inhabitants moved closer to the sea and built Patitiri. For long years, Alonissos was unihabited, until a group of German artists renovated the buildings at their own expense or rebuild them, and so brought the town to life again. Today the reconstructed houses are hiding luxury suites. Above the town, ruins of a small fortress have been preserved, that served as a watchtower and also a point of defence against the pirates.

Other places worth visiting are the villages of Roussoum Gialos and Votsi that are much more peaceful and to sit down in their tavernas has its distinctive charm. On your wanderings on the island, don’t forget to visit also the little village of Steni Vala that would be a refuge of pirates in the past, and the village of Kalamaki, a true oasis of piece.

The island beaches have been made to relax; with the clean sea and pine groves completing the peaceful scenery. Along the seacoast, there are many little hidden beaches, with some of them being more difficult to access from land, yet that means it is quite probable you will be there alone even during the peak season. Most of them are pebbly beaches and they can be enjoyed by snorkelling enthusiasts or lovers of other aquatic sports. Among the beaches worth mentioning, you can find the following: Agios Dimitrios, Agios Petros, Glyfa Beach, Chrissi Millia, Jezera Beach, Kokinokastro Beach, Lefto Gialos, Marpounta Beach, Megali Amos, Megalos Mourtias, Mikros Mourtias, Milia Beach, Patitiri Beach, Roussoum Gialos, Spartines Beach, Tzortzi Gialos, Vamvakies Beach, Votsi Beach, Vrisitsa Beach and Vythisma Beach.

There are many reasons why you should visit this amazing and not too much commercialized island. For some the key and decisive factor can be the very fact the island is not overflowing with tourists, it is not larded with high-rise buildings of large hotel resorts, and thus it has preserved its traditional character.

Points of interests and holidays

The rocky coast of the island forms many caves, and on the northern side, between the Strovili and Lalarias beaches, just a few kilometres north from the Agios Dimitrios village, you can find the frequently visited Blue Cave. You can make there a nice boat trip and explore the coasts of Alonissos island.

Every year, there is a counteless number of festivals and holiday celebrations taking place on the island. Among the most interesting ones, you can take part in the Fisherman´s Night with all the port towns taking turns. At his occacion, people dance, sing, drink wine and eat fresh-caught sardines. The event usually lasts till early morning hours. Agia Paraskevi, the celebration of the island patron saint, is held on July 26, with the islands inhabitants walking through the streets of Patitiri with the icon of their protector. The celebration is topped, as usual, with traditional music and dance in the port. Another of the holidays is called Alonisma which is also celebrated in July. It demonstrates the way how wheat used to be threshed and further processed in the past. The visitors can taste a dish called frumenty - wheat boiled in milk. In August, the island and the whole country celebrate the Virgin Mary Day. The celebration starts early in the morning with a church service, then the men who fell during the World War II are commemorated.

We bring you two videos from our user, Gliding Alonissos

... and a video from the Cheese Pie Evening:

The Mediterranean climate with its rainy winter and the average temperature of 17°C contrasting with the warm and dry summer makes Alonissos a green island full of diverse fauna and vegetation. In springtime, when the sea is still quite cold but the temperature of the air is already quite nice around 20°C, you can make many walking tours and trips on the island. The summer there, like on other islands of the Northern Sporades, is really hot and the sea is warmed enough. For more detailed information about weather on Alonissos island, you can read our weather overview for Alonissos or visit a specialized site, Alonissos: Climate and weather forecast for the next 15 days.

History of the island

The history of the island that used to be known as Ikos, is traced back to more than 100 000 years ago and is wrapped in myths and stories from the time when the island, like all the Northern Sporades, was under pirate attacks. As the locals were facing fear, they moved from the coast further to the interior where they built fortifications and all of their activities were taking place in the immediate proximity of the walls. Their houses were erected right on the ramparts, they had small windows, and if needed, these dwellings served as protective shields. Outside close to the walls, secret pillboxes were built, with water and food supplies for those who didn’t manage to hide behind the fortification gates in time. Unfortunately these fortifications have not been preserved till nowadays; their ruins were destroyed by an earthquake that affected the island in 1965. Alonissos was also standing out for its pottery, and thanks to its pine forests, also for its art of boat construction. The amphoras with the writing of ‘Ikion’ were exported throughout the ancient Greece. Today the Alonissos inhabitants live mainly on fishing and tourism.

During the 8th and 9th century, vineries started spreading on the island because of huge demand for Greek wine worlwide. The wine was exported till the end of World War II when the vineries became infected with some disease which meant the end for wine exportation. During World War II, the islanders were called to fulfill their patriotic duties, however in the very moment when their island was attacked by the Germans, they came back to protect their friends and families and they became actively involved in organizing the safe transport of the Allies. On August 15 in 1944, 11 members of this resistance movement were shot in public. The locals continue commemorating them as heroes.

In the old Alonissos (Chora), there is a significant neoclassical building that allegedly belonged to the most beautiful pieces of architecture on the island. The building is an old school constructed at the end of the 19th century. Due to its insufficient capacity, it was enlarged with a new building in 1956 and unfortunately it completely transformed the character of the place.

Churches in the old Alonissos

The first churches were built in the safety of the old town walls of Alonissos (Chora), and later also all over the island. Out of the five churches, the following have been preserved: Church of the Birth of Christ from the half of the 17th century, Agios Athanasios Church from the 18th century, Agios Giorgios Church also from the 18th century, and finally the Agios Nikolaos Church which has been newly built, yet on the place of the original church. The Agios Dimitrios Church that used to be situated close to the Agios Athanasios Church didn’t survive the devastating earthquake.

Alonissos is a place where there are no significant monuments, yet its nature and hospitable inhabitants fully compensate this fact. If you are yearning to relax on the sun, bathe in the pure bays, enjoy the delicious home-made food and unforgettable sunsets with the chirping of cicadas, you will certainly find all that right there.

Tips on a hotel in the area Alonissos 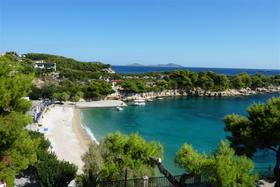 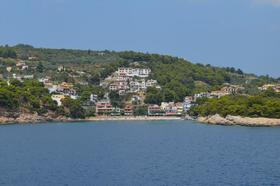 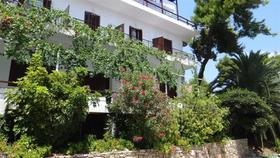 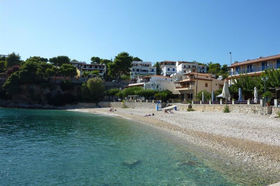 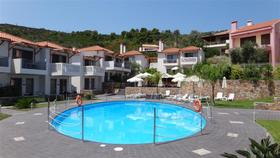 5.
edit
A related area
Did you find what you were looking for?