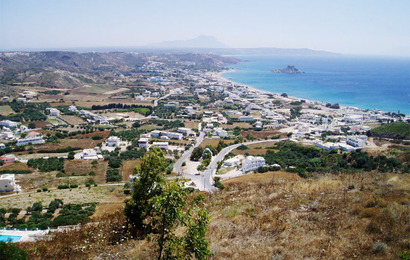 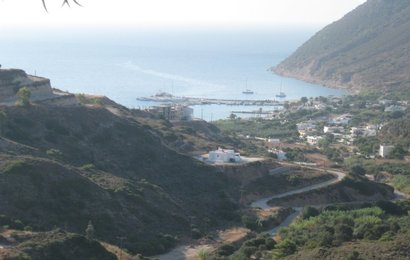 Kos - Basic information on the Island

The Greek island of Kos, the home of Hippocrates, the father of medicine, ranks among the smaller of the Greek islands, but all the more abundant in historical sites and localities attractive for tourists. With its quite lowland surface, it is the favourite target of all who like to go hiking or cycling to discover the landscape. And this is what Kos Island has been adapted to - it is literally dotted with a maze of paths suitable for long walks, or car or horse rides. But still its attraction number one are the local amazing beaches, lining most of the long coastal area, mostly sandy and washed by crystal clear water. Given its location in the vicinity of other interesting islands, Kos also serves as a point of departure for boat trips.
Kos is a 45 km long piece of land amidst the bluish waters of the Aegean Sea, only a few kilometres from the Turkish coast. The distance from the Lambi Neach on Kos to Turkey is 4 700 m, and with good visibility, the view on the Turkish coast can be very interesting as it is scattered by small snow-white villages.

And when talking about metres and kilometres, Kos is 45 km long but it is much less wide and its width varies a lot: while the eastern part is about 10 km wide, the western half of the island is divided by a very narrow stretch of 1 600 m only.

Kos is a part of the Dodecanese archipelago formed by 12 islands that gave the name to it (Dodekanésos means ‘12 islands’ and it includes also Rhodos, Karpathos or Kalymnos). With its area of about 290 - 295 km2, Kos is the third largest Dodecanese island. If you find the island interesting, you should also take a look at the Kos map including resorts and beaches to know what the island is like before you continue reading.

Kos Island is one big historical site on its own. The  island capital, full of green vegetation and architectural jewels, is located in the eastern part of the island. Its origins are dated back as early as the 4th century BC, therefore it is clear there are lots of remains of the ancient history. Probably the most visited place is the Castle of the Knights of St. John with remnants from the ancient era that is the landmark of the city port. In front of the fortress, you will find the famous Hippocrates Plane Tree, a huge construction of 12 m in perimeter that the illustrious doctor had allegedly planted by himself, and later taught there his students. This story is a bit contradictory to the fact that the tree is only 500 yeras old and thus much younger than Hippocrates, but a legend is a legend, and so to savour the mystical atmosphere of the place, we will turn a bling eye on the facts.

There is never enough information about Kos Island. And who would be more familiar with the island than those who have spent there their holiday? We would like to ask you to dedicate a few minutes of your time evaluating your holiday on the island, telling us what you liked there and what Kos means to you, or possibly also to give us tips and advice that could be useful for other visitors who are interested in the island and are thinking of going there for holiday.

Then you will be able to enjoy the Hippocrates Festival that is held on the island every year, accompanied by music, dance, theatre performances and obviously delicious food - including the local cheeses and sweet bakery, usually savoured by honey that has a deep-rooted Near the plane tree, you can admire the ancient market of Agora from the 3-4th century BC. Since there has always been some Turkish influence on Kos due to its short distance from Turkey, at least when talking about architecture, in the capital you will also find a mosque. And of course the city has many tavernas, cafés, restaurants, shops with all kinds of stuff including souvenirs and groceries, but also nightclubs and discos.

Another rarity of the island is Asklepion, an ancient hospital that can be found a few kilometres west of the capital. It is one of the most remarkable archaeological sites of the island and the whole archipelago. Even Hippocrates himself is said to have worked there. Another no less interesting attraction, altough completely different, is the salt lake which is complately dried-up in the summer and covered with a white layer of salt. The vast area stretching on two kilometres resemble an ice surface. On the contrary, in winter it is full of water. This unique natural phenomenon can be found on a plain near Tigaki resort on the north coast of the island.

Are there any more interesting places on the island?

Although the island surface is rather plane, some hills for more demanding and adventurous visitors can still be found there. The highest monutain range of Kos, forming an interesting contrast with the large valleys, can really make sweat those who try to climb it. Its name is Dikeos and it has a peak of the same name. Its height also varies since different sources state different heights each, so you can find the peak is between 840 and 875 m high. The figure on maps usually corresponds to 846 m.
Yet this is still not all. As the island territory, prooudly protruding from the sea, was formed by tectonic activity, you can find there its remnants in the form of sea thermal springs, with a temperature reaching up to 50°C in Agios Fokas, for example. Another proof of the volcanic activity is the little island of Nisyros on the south of Kos that is a true extinct volcano - you can even walk into its interior. Although the trip is completely safe, it will certainly make you shiver.

And if you wanted to travel outside Greece, you can go for a trip to Turkey to the resorts of  Bodrum or Marmaris).

If you are asking yourself the question what is the best time to visit this beautiful island, you need to make yourself clear what you expect from your holiday. For hiking and getting to know the island history, the best is to choose some of the low season periods in spring or in autumn, when there are not so many tourists on the island and the weather is favourable for these activities. The air temperature usually reaches a maximum of 30°C. In spring (in May and June), the positive thing is that the days are long, the nature is fresh and all in bloom, nonetheless you need to bear in mind that the sea temperature will definitely be refreshing. On the contrary, in autumn the sea will already be nicely warmed. In the middle of the peak season (in July and August), air temperature is usually around 35°C, while the sea has nice 25°C, which is perfect for those who love bathing and beach idleness. For more details, see the section Kos - Weather.

The traditional attraction of all the Greek islands are the beaches, and Kos is no exception in this respect. It wouldn’t be exaggerated to say that Kos is one large beach all around the island.

Most beaches are sandy and can boast crystal clear water of a beautiful blue colour. Many of the beaches are perfectly equipped, providing all the necessary comfort to the holiday visitors. Together with the magnificent nature of all the colours, the coast of Kos Island creates an unforgettable atmosphere you will remember long time after your departure. The most popular of the beaches are Paradise, Lambia, Thermes or Camel Beach.

On Kos there is a ban on diving with an oxygen cylinder for the reasons of protection of the archaeological sites; but snorkelling is still tolerated. For diving you can make a boat trip to Kalymnos Island from the Kos port.

If you think of the capital of Kos as a departure point, then the approximate distances between various places on the island are as stated in the chart. Kos is a very small island. As written above, it is 45 km long and 1.5 to 10 km wide. There many cycleways and hiking paths on the island, but you can also rent a car or a scooter and travel wherever you like. From car rental companies, we can mention e.g. Trust Rentals, offering also boats, or the Nancy car rental service. For more details, see the section Kos - Rental services.

Who to travel to Kos Island with?

With its many historical sites and splendid sea, Kos is a very popular destination, which is obviously reflected in the offer of travel agencies. You can find most of the tours in our system (Kos - Tours centre). The tours can be purchased with one of our special bonuses (a discount, a travel guide or a map), but some travel agencies also offer a discount for an online reservation or have other special offers that couldn’t be included in the price list. Therefore we would highyl recommend you to see the offer of the travel agencies states in the chart of Recommended travel agencies. For a complete overview of hotels, suites and studios being offered in the destination, see the section Kos hotels, suites and studios. The stated travel agencies are also included in the description of the respective accomodation facilities.

Where to go to Kos?

Tips on a hotel in the area Kos 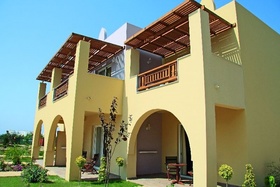 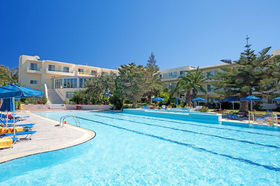 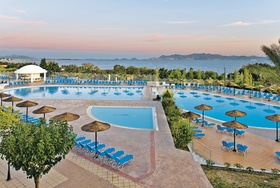 Kipriotis Panorama & Suites from 19 543 Kč with all the fees 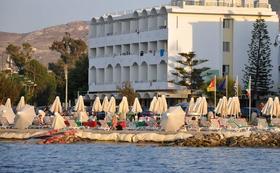 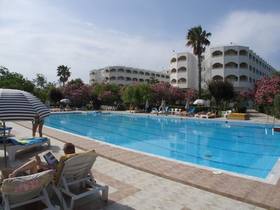 Continental Palace from 16 441 Kč with all the fees