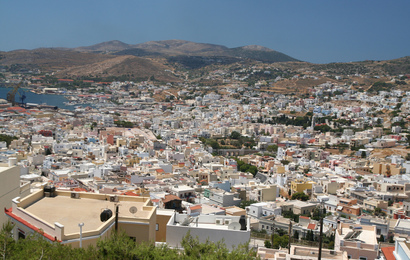 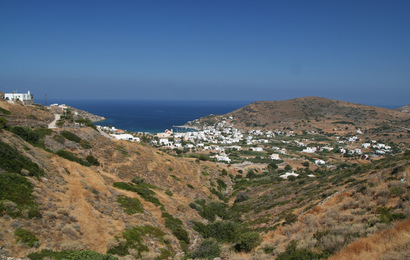 With its capital town of Ermoupolis which is also the administrative centre of the Cyclades, Syros belongs to the rare gems among the Greek islands in turquoise Aegean Sea. It is no wonder than that it is spoken highly of and often being called the ‘lucky island’. In fact its original Phoenician name of Ousyra means ‘happy’, and so it can be guessed that if the island had such a splendid name already in the Phoenician era, then the region must have been really flourishing and prosperous. Besides its important administrative function, Syros is also a kind of a cultural mecca of the region.

Since the island is a popular tourist destination, it has corresponding tourist services. Especially the offer of consumer entertainment is really large.

And so, the island has many bars, restaurants, discoes, dance clubs, casinos, concert halls, cinemas and theatres. The accommodation facilities on the island will fit every budget - you can spend a night in a luxurious suite but also in a private room in some of the local traditional houses, serving as family pensions and villas.

There is never enough information about Syros Island. And who would be more familiar with the island than those who have spent there their holiday? We would like to ask you to dedicate a few minutes of your time evaluating your holiday on the island, telling us what you liked there and what Syros means to you, or possibly also to give us tips and advice that could be useful for other visitors who are interested in the island and are thinking of going there for holiday.

Every year during the summer season, the island is exposed to the north-west winds, cooling the air to a nice temperature. Otherwise the island would be unbearably hot. After all, you can read more in the section Syros: Weather. With its Mediterranean climate, Syros belongs to the dry areas of the Cyclades. And it is not surprising - there isn’t any source of fresh water on the island, and so sea water is used after isolating the salt from it in the local factory. This is how drinking water is prepared; although it is still quite salty and so not completely suitable for drinking.

It is always better to buy bottled water in a supermarket.

What to do on Syros?

The island of Syros, with a history dating back to the early Early Stone Age, is a place of many faces, at least as far as landscape is concerned - the island has hostile rocks but also fertile plains and charming bays with magnificent beaches. The most beautiful of the beaches can be found in west, south and south-west of the island, where holiday-makers will find also the well.known tourist resorts of Galissas with its long sandy beach, a similer Finikas, Possidiona with crystal clear water, and finally a Komito and Ambela beaches offering more peace. A bit further in the north, there is a beach called Delfini, standing out for ots goldish sand and clear water.

Most of the populated areas, i. e. towns and villages, preserve their classical character, so typical of the Greek islands; including the farms producing traditional but also ecological products like fruits, vegetables, cheese, diary products or honey.

To see where all the places are located, visit the section Map of Syros Island.

On the territory of Syros Island, you can move by all the means of transport available, including your feet, but also buses, cars, motorbikes, bikes and planes, and obviously you can use boat transport to the surrounding islands of Andros, Mykonos, Tinos or Naxos or go to continental Greece using the port of Pireus.

From all the interesting places on the island, the one that should me mentioned is the capital town of Ermoupolis. This administrative, cultural and trade cnetre of the Cyclades is a national monument of the Greek culture. The town was built  between two hills, with two churches rising in their peaks - one orthodox and one catholic one, and the whole atmosphere is completed by a row of neoclassical edifices. The impressive square in the town centre with many oft buildings and the statue of the Greek hero, the admiral Miaoulis, becomes really charming at night with the sounds of life music and the little cafés offering a nice sit-down over delicious drinks and tasty Greek dishes.

A rare edifice from the cultural point of view is the Municipal theatre of Apollo, a miniature of the famous Italian opera La Scala in Milan. You will also find there significant religious buildings: the majestic church of Kimisi, church of St. Nicholas with an adorable sky-blue dome decorated by marble, the church of St. Georgio near the local cemetery, or the Church of Our Lord Besides those significant monuments, you can visit some of the local museums and galleries.

Above the capital town, there stretches a place called Ano Syros full of charming streets, corners and snow-white staircases. There is a breath-taking view on the port and blue water surface, just like from the convent of St. Barbara west of Ermoupoli. Other places worth visiting are definitely the natural jewels of the caves of Alithini, or Plati Vouni

(where Pythagoras’ teacher Pherecydes is said to have dwelled), or some of the charming bays and gulfs with sunlit beaches, where you can capture the unrepeatable atmosphere of the island.

Where to go to Syros?

The most visited resorts on the island is Galissas. Other resorts are Agios Dimitrios, Azolimnos, Finikas, Kini, Megas Gialos, Possidonia or Vari. There is also public transport oeprating between all those places - see the section Syros buses, so you can set off to explore the beauties of the whole island at low cost.

Here are a few tips for accommodation on Syros. For a complete overview, see the section Syros hotels

Tips on a hotel in the area Syros 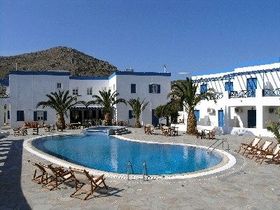 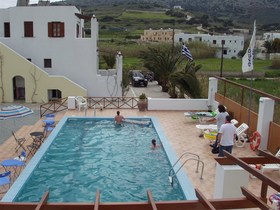 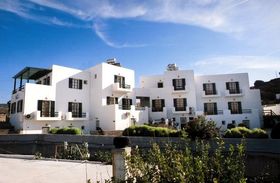 3.
edit
A related area
Did you find what you were looking for?