The picturesque island of Lemnos, although it boasts an extremely varied and indented coast rich in charming bays and sandy beaches, doesn’t belong to the most visited places in Greece. And it has to be said it is a pity. On the other hand, it is for this very fact that the island preserves its unmistakable character, its original insular atmosphere, and above all its beautiful and almost unspoiled nature. Therefore it can offer much more to the visitors than other destinations tempting for swimming in the sea, sunbathing and different beach activities.

Of course you will find beaches on the island, too - they are said to be more than one hundred, which is incredible; nonetheless it is quite easy to find there a comfortable place to relax. The added value of the island are walks through the colourful landscape, many unique animal species in the vicinity of the lakes, and the visits of rare archaeological sites and adorable villages with their own pace of life. If you want to get a better idea about Lemnos, see also the section Lemnos Map.

Location and size of the island

With its three large peninsular promontories and the area of nearly 500 km2, the island of Lemnos stretches in the north-eastern part of the Aegean Sea, very close to the Greek mainland (the closest larger island is the peninsula of Chalkidiki), and in the proximity of another target of the tourists, the popular island of Lesbos it comes under administratively. It is also quite close to the shores of Turkey and its little islands of Imbros and Tenedos. Given its position in the south of Europe, it boasts a nice and warm climate, especially in the summer months with low precipitation and mostly sunny days, with the weather getting a bit colder only after dark.

The island of Lemnos is fringed all around by more than 250 km of coastal landscape formed by gulfs, bays, beaches and rocks. Those prevail especially in the north-west of the island, with the highest peak of Skopia or Vigla reaching the height of 470 m, while towards the east, the hills recede and lowlands start stretching.

There is never enough information about Lemnos Island. And who would be more familiar with the island than those who have spent there their holiday? We would like to ask you to dedicate a few minutes of your time evaluating your holiday on the island, telling us what you liked there and what Lemnos means to you, or possibly also to give us tips and advice that could be useful for other visitors who are interested in the island and are thinking of going there for holiday.

Our user Renata wrote about the island:

The island of Lemnos has enthralled me. I have visited many Greek islands and Lemnos is quite different - tourist industry is not so developped there, and although this is at the expense of the quantity and price of the services, it is definitely worth visiting. The beaches and historical sites (which are much older than e.g. in Poliochni, dating back to approx. 4 thousand years BC) are half-empty, but you need to rent a car since the public transport is not very reliable, but again, it is worth it. I have to say I don’t recommend the island to anyone so that it would preserve its peace...

In general, the island can be ranked among those that don’t reach high altitude with their surface. The local ground is fertile, although paradoxically not very suitable to grow olive trees which can be otherwise seen on most of the Greek territory and have become a kind of Greek landmark. That doesn’t make Lemnos Island less attractive though. In the local natural ecosystems, you can observe many other plants and animals. For example, near the lakes of Alyki and Hortarolimni with swamps and marshes, there is a large population of birds including flamingos, and many interesting plants.

People and places of interest on Lemnos

Lemnos has about 20 thousand inhabitants who mostly make their living by farming, i.e. growing fruits, grapevine, cereals and mulberry, the basic article to produce silk. On the slope and hills, farmers take care of their flocks of sheep, while near the coast, people dedicate themselves to fishing. Yet the most famous ‘product’ of the island is the local soil,  wrapped in legends and extracted only once a year during a special ceremony, that was used in the 16th century to cure the plague, snakebites and other injuries. The locals are said to use it till nowadays.

Some of the local inhabitants have already got involved in the tourist industry, establishing their own catering or accommodation facilities, that, despite not being too commercialized (as they usually are in other Greek destinations), ensure all the comfort the island visitors may need. Therefore you will find there both hotels suite houses along the coast. The local restaurants will certainly satisfy your sweet tooth, offering delicious specialities like home-made cheese, wine and honey, all that made exclusively of natural ingredients originally from the island.

On Lemnos island, you will find some of the most beautiful beaches of the north-eastern part of the Aegean Sea. As it has been already said, there is about one hundred of them, some covered with sand, other with soft pebbles. All of them preserve their original natural character, offering enough privacy for all-day idling and sunbathing. Their water is crystal clear, and the surroundings are mountainous, sometimes rocky, covered with fresh green vegetation.

One of the very popular beaches is Plati, located 2 km south-east of the capital town of Myrina. It is 700 m long, fringed by nice bars and tavernas, and offering countless possibilities of various sports activities. Other popular beaches (fully equipped ones) are the beaches of

Riha Nera and Myrina. Here you can relax and enjoy different water sports - whether you like frolicking on water skis, devote to windsurfing or go for a boat ride - but also taste seafood delicacies in the local tavernas. If you prefer less well-known remote places, you will certainly appreciate the calm beach of Kokkina that got its name for its reddish sand (kokkina means ‘red’ in Greek). Those who like walking and beach jogging will love the several kilometres long Makris Gialos.

The capital town of Lemnos is Myrina, also called Hora or Kastro, with approx. 3.5 thousand inhabitants. The foundations of the town named after the wife of one of the then rulers were laid down as early as in the 12th century. Today the town is not only the centre of all services like banks or hospitals, but it is also an architectural and cultural jewel of the island. The rows of simple neoclassical houses, commemorating the faded glory of the Roman Empire, were mostly built in the second half of the 19th century. The small port where you can taste delicacies made of freshly caught fish, was guarded for centuries from a huge fortress above the town that was later rebuilt into a castle. Here but also in the port itself, you can feast your eyes on the magical sunsets lining the whole seacoast with gold.

The town has amazing historical sites displaying ancient cultures. The Archaeological museem, where rare objects from all over Lemnos Island have been gathered, offers artefacts dating back to the Bronze Age till the Roman era. You can also visit the Byzantine or the Church museum. Another place worth visiting is the  Agia Triada, located in the town centre. Those who prefer more lively kinds of art can choose from many performances of the traditional theatre festival throughout the whole summer, but you can also visit the festival of dance and folk costumes in Kondopouli.

What to do on Lemnos?

Outside the capital of Myrina there is also much to see. You can visit for example the Temple of Artemis, a monument from the Hellenistic period, or go to some of the picturesque typical Greek villages. Plati, also know for its magnificent beach, will enthrall everyone with its nice atmosphere, charming snow-white houses with red roofs, and also the fact that this settlement used to be located a few kilometres further but then, for fear of the raiders, it was moved further to the interior. If you are lucky, in Kaspakas, one of the largest municipalites on Lemnos, built as a defence point against the pirates, you can witness a traditional Greek wedding, or just walk through the adorable streets with stone houses and the original paving. In Kornos you can relax enjoying the healing hot springs spewing from the depth of the earth and thus reaching about 44°C. Near Thanos, another village that had to be moved, you can admire the Church of Panagia Kakkaviotissa, built in a cave difficult to access at the peak of the hill above the settlement, consecrated to the Virgin Mary.

On the list of the places located on the sunny eastern coast of the island, you will find e.g. the port of Moudros (with Havouli and Faranaki beaches), the second largest town on Lemnos, known especially for its great significance in maintaining the ecological balance of the island nature with the marshland in the town’s proximity. You can also visit there a monastery or a British cementery. Evidence on the existence of the Byzantine Empire can be found in the little town of Roussopouli where the remains of the original fortifications and churches, often built of marble, have been preserved. The village of Poliochni, the site of archaeological excavations (e.g. from the Hellenistic period or the time of the Roman invasion), boasts a collection of rare paintings of religious figures of the saints. After visiting the Church of Agios Alexandros, you can take some rest over a glass of delicous red wine, and let yourself stupefy with the nice scent of anise which is grown on the island to become an important ingredient of the national drink, ouzo. If you like the scent of wild thyme, don’t forget to visit, Agia Sophia, an abandonned village, with four magnificent windmillw towering above.

If you get tired of the beaches and ports, you can visit the island’s beautiful interior. The local villages are extremely varied, given the changing character of the landscape. In Varos, you can buy delicious cheese, produced to be exported to other parts of Europe, while in Agios Dimitrios, you can pick sweet raisins, sip wine or the traditional ouzo. Then you can continue tasting the Greek dainties in Atsiki where sweets of all kinds and more foods and beverages are produced.

Lemnos reveals very little from its history. Its original inhabitants were the Thracians. The island was conquered and populated by the Greeks only in800 BC, but Lemnos was belonging to Athens by then. in 1657, the island was taken over by the Turks for long 264 years, and it was returned to Greece only in 1921.

Where to go to Lemnos?

Travel agencies offer tours mainly to the resorts of Myrina and Plati. You can find most of the tours in our system in the Lemnos tours overview, or you can take a look at our list of hotels, suites and studios. We also recommend you to view the sites of the travel agencies stated in the chart, as they can sometimes have interesting offers or discounts.

Tips on a hotel in the area Lemnos 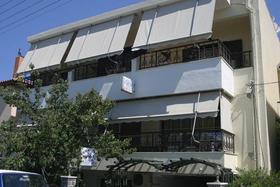 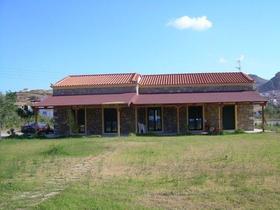 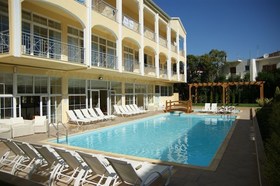 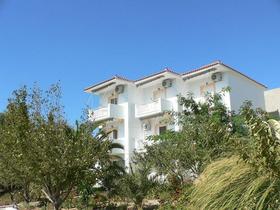 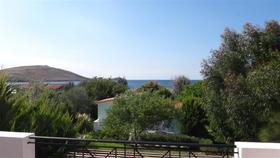 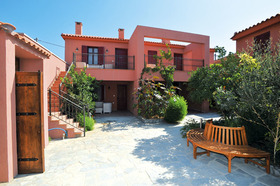