The well-known Mykonos, an island of pelicans, windmills, and a favourite gay holiday resort, but also an inspiring and entertaining place can be found in the Cyclades archipelago (including also the islands of Santorini, Andros or Syros), washed by the Aegean Sea. Thanks to its beauty, high quality services and slightly higher prices, this amazing island with an area of about 86 km² is popular mainly among celebrities and wealthy clientele who come here on their luxury yachts or by airlines from Athens.

Yet this doesn’t really mean Mykonos would be an island only for the rich. You can find there plenty of places that will fit any budget. After all, who would like to miss all the splendour? The indented coast full of small and large gulfs and bays, colourful beaches, cascade architecture, archaeological sites and varied nightlife... That’s just a short account of the beauties of Mykonos Island. If you are interested in more details concerning its location and where all the resorts, beaches or historical sites are situated, see the section Mykonos Island Map.

There is not too much green vegetation on the island - given the lack of humidity that only comes in the winter and spring months, vegetation doesn’t really flourish there, and so, the island territory could be characterized more with hills and a generally mountainous and rocky surface. The mountains start to rise right at the coast to reach up to 400 metres in the interior. Despite being covered with mountains, Mykonos has a nice island climate. The summers are very warm, with almost no precipitation, and a bit more intense wind in some areas. Yet the wind is the paradise music for the surfers and lovers of other ‘windy’ sports, giving its strength to the sails. For detailed information on the climate and weather forecast, see the section Mykonos - Weather

There is never enough information about Mykonos Island. And who would be more familiar with the island than those who have spent there their holiday? We would like to ask you to dedicate a few minutes of your time evaluating your holiday on the island, telling us what you liked there and what Mykonos means to you, or possibly also to give us tips and advice that could be useful for other visitors who are interested in the island and are thinking of going there for holiday.

What to do on Mykonos

The capital of Mykonos bearing the same name as the island is a cultural, administrative and entertainment centre of this picturesque piece of land amidst the sea. The afternoon and night walks through the town are really charming - on your way, you will see white houses that are scattered in the surroundings like building bricks for children, of which the sharp corners and spanking cleanliness are really spectacular; weird crooked streets with stone mosaic pavements, where everything is on its place although there is no line which is exact; and a row of charming windmills towering above the town. Then when you walk down back to the port, you find yourself in Venice! Or at least in the Little Venice, as a small group of local houses is called, that are washed by the sea like in the Italian city built on water. Obviously the island ‘metropolis’ has bars, discos, music a night clubs, and many shops offering souvenirs, jewellery and clothes.

Those who don’t like to lie on the beach can set off for a sightseeing tour of the island. Mykonos has many options to choose from. Besides the windmills, small island villages and several hundreds of churches, you can visit for example the remains of the medieval castle of Kastro.

If you travel to the south-west of Mykonos by boat, you will come across the small island called Delos. Despite being a tiny, mountainous and not very green piece of land (it has a bit less than 4km2) which is not even permanently inhabited, in has one interesting thing to see - there are vast archaeological sites and museum premises.

One of the main attractions of Mykonos Island are obviously the beaches, some of them serving as a place for lively night parties and entertainment. Most of the popular beaches can be found in the south, south-west and south-east of the island. They are mostly sandy, the sea water is crystal clear, and the offer of tourist services is quite broad, including aquatic sports and refreshment shops. One of those beaches is Paradise (the best equipped beach inlcuding night entertainment till the early morning hours), Super Paradise (a popular beach among the homosexuals from all over the world), Elia (a fully equipped beach with fine sand, the longest one on the island), Platis Yialos (a fully equipped beach and one of the most popular ones on the island), Psarou (a beach sought after among celebrities) and

Kalo Livadi (one of the largest beaches on the island). On the other hand, the calmer beaches are Agia Anna (with no tourist services or equipment), Agios Ioannis (one of the most beautiful beaches on the island), Panormos (a calm sandy beach with clean water), Agios Sostis (a bit more difficult to access compared to other beaches, but offfering much more privacy), Kapari (located close to the chapel of Agios Ioannis) and Lia (a beach with deckchairs and umbrellas). Those who like sports and adrenaline activities will appreciate the beaches of Ftelia (a windy beach, thus suitable for surfing and other sports requiring huge waves and wind), Kalafatis (suitable for water sports) or Ornos (suitable for divers and the lovers of water sports, but often overcrowded).

The archaeological findings of the island uncover the history dating back as early as the 3rd millenium BC when it was inhabited by Neolithic tribes. Given its location, Mykonos played an important role in the past - it supplied with food the inhabitants of Delos Island, and according to Greek mythology, it was where the fabulous struggle of Zeus and the Giants took place. At the beginning of the 11th century, the island was settled by the Ionians, and the island was named after Apollo’s grandson, Mykonos.

How to get to Mykonos?

You can travel to Mykonos either by sea or by air; there is no other way. Ferries depart from Piraeus and Rafina, or you can take a flight from Athens.

Where to go to Mykonos?

Tips on a hotel in the area Mykonos 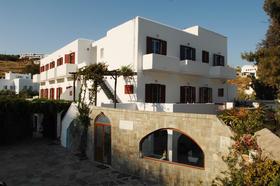 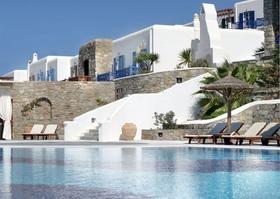 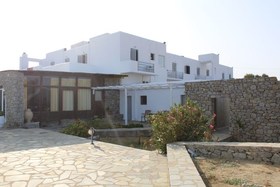 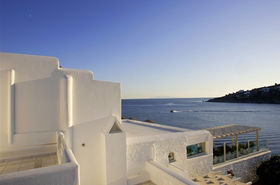 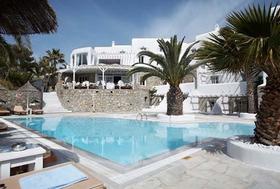