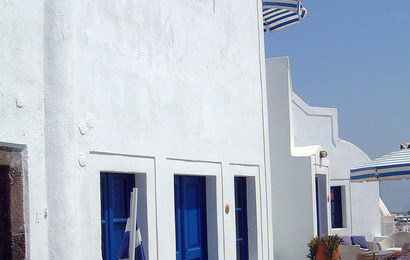 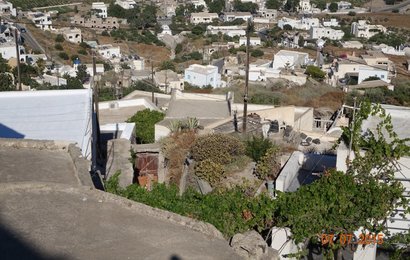 Santorini: A bit of history

The island of Santorini has the are of only about 80 km2, and 10 000 permanent inhabitants, but it will enthrall you immediately after your arrival.

As the island is in fact the peak of a volcano fallen to the sea, the part that can be found above the water level are the several hundreds of metres high remains of the volcano crater, with the snow-white buildings of the capital and villages. Santorini (also called Thira) is the southernmost island of the Cyclades (including also the islands of Andros, Naxos and  Syros), located about 100 km from Crete and  220 km south-east of the Greek capital, Athens. The whole island has emerged and was greatly influenced by volcanic activity.

The most famous and most visible traces of the volcano raging are the little islands of Palea Kameni and Nea Kameni that were formed only 60 years ago and can be seen from the islands coast. A much older eruption that took place several thousands of years ago (in the 17th century BC) served as an inspiration for the legend on the mystical land of Atlantis, the flourishing civilization that suddnely disappeared from the world. It is said that this fabulous land used to be located on the place of the today’s island of Santorini and that it was just the volcano that caused its ending. The explosion was so strong that it could be compared to 160 000 bombs dropped on Hiroshima.

There is never enough information about Santorini Island. And who would be more familiar with the island than those who have spent there their holiday? We would like to ask you to dedicate a few minutes of your time evaluating your holiday on the island, telling us what you liked there and what Santorini means to you, or possibly also to give us tips and advice that could be useful for other visitors who are interested in the island and are thinking of going there for holiday.

The weather and climate of Santorini Island is ideal to spend a perfect holiday, especially in the peak season from April to October when both the sea and air temperatures reach favourable values and there is almost no precipitation. The winters are quite mild and rather rainy, and so those months are a more relaxed period when the island inhabitants are preparing for the new tourist invasion. The sunshine, together with the picturesque mountainous nature and classical Greek architecture forms a typical picture of Greek coast, often becoming a model for postcards and tourist guides.

If you like Santorini and you would like to know the island more, take alook at our overview of sightseeing tours. Some of the tours, especially those to Crete, include also this very island.

The main attraction of the island are its magnificent beaches. Those vary depending on their quality and the tourist services oferred, and the type of their surface. Given the past volcanic activity that formed the landscape as we know it today, the differences can be seen in the colour of the sand or the pebbles covering the coast. The local colours are incredibly varied, including white, scarlet, but also black. Some of the beaches even have names derived from their colours (White Beach or Red Beach)

For the tourists searching for the maximum of comfort, Santorini Island has sand and pebble stretches of coast in the southern and eastern part of the island. Those include Monolithos (a windy beach with grey sand), Avis (a black, more peaceful beach with enough refreshment facilities and entertainment), Kamari (a dark pebbly beach), Perissa (a beach with very dark, almost black pebbles,

Perivolos (a beach covered with black pebbles, also called the Black Beach), and Agios Georgios (another of the dark pebble beaches, this time with a very elaborate network of tourist services). Most of those summer destinations have been designed for young families with children, couples, and those who love water sports. In the very south, you will be surprised by the deep red rocks of the Red Beach, and its exact contrary, the White Beach, with very fitting names indeed. Their colours are completed by the beach of Vlychada with dark grey sand. The north offers more peaceful places, better hidden from the bustling tourist life. Near the charming village of Oia you can find Paradisi (a remote beach with a topping of grey and black sand, providing ideal conditions for surfing and other similar sports as it is very windy), Kolumbo (a grey pebbly beach away fom civilization), Paradise (a windy beach with grey and black sand) Ammoudi (a difficult to access beach, although with very clean and deep waters) and Pori (a beach that doesn’t offer too much comfort but the visitors will encounter the wild beauty of the coast with scarlet rocks and blue and green water surface). To view all the beaches, see the section Santorini Beaches.

You can find most travel agencies and tours here in Santorini: Tours centre. The tours can be purchased with one of our special bonuses (a discount, a travel guide or a map), but some travel agencies also offer a discount for an online reservation or have different offers that couldn’t be included in the price list. Therefore it is highly recommended to see also the offer of the travel agencies listed in the Recommendation of a Travel Agency chart. You can find a complete overview of the hotels, suites and studios offered in the destination in the section Hotels, suites and studios on Santorini.

What to do on Santorini?

Since the island is a frequently visited tourist centre, there is a borad range of various entertainment activities so that everyone who arrives at the island could enjoy their holiday.  Like on other islands, most opportunities are concentred in the capital town of Fira. In the peak season, the highlight are the local bars and clubs, so it’s up to you to choose where you will spend the night full of music and good drinks

, if this is the kind of fun you prefer. In some night spots, there is life music, offering a wide range of genres (traditional Greek music but also modern music including  pop, r'n'b, oldies, rock, funk and ethno. Besides the capital, other popular sea resorts are Perissa, Perivolos or Kamari, reveling in the rhythm of the music until the dawn, and so the destination is popular mainly among young people. For those who like more peaceful environments, there is nothing easier than going for a walk on the beach or to a taverna.

The lovers of arts certainly won’t miss the MATI art gallery, located in the capital of Fira. The exhibition includes truly interesting artworks inspired by nature and the human body, constisting mainly of statues, pictures and jewellery.

In the capital town and some other municipalities of Santorini island, you will find many different shops with everything you may want, including souvenirs and gift items, jewellery and fashion, but also local folk art and groceries.

Besides shopping, lying on the beach and visiting historical sites, it is highly recommended to explore the island on foot or on a bike, since walking you can see places that are not accessible by car. On your trips you can often see photographers who travel to Santorini for its perfect light conditions. Those who don’t like long tours can participate in organized bus and boat trips to the most famous spots on the island.

If you want to know where Santorini resorts and beaches are located, see the section Santorini Map.

Santorini is quite small and there are regular bus lines operated on the island. The only problem is that the buses don’t go to the small beaches in the remote areas. Therefore if you want to visit only resorts and towns like Fira and Oia, a bus is enough, but if you want to know the island’s beauties, you should consider renting a car or a scooter. You will find the list of car hire services e.g. in the section Santorini: Car and scooter rental services.

If you make do with the bus transport, take a look at the map of Santorini including bus lines. For timetable and price list, see the page of Ktel buses (the site will open in a new window).

The island specilaity are the local wines, so the lovers of this beverage will be certainly delighted. The local wine is a completely natural product of the island microclimate as a result of volcanic activity, so typical for Santorini. Incredibly enough, the history of wine-making started more than three thousand years ago and it is explained in the Wine Museum located in the region of Vothonas near the beach and the resort of Kamari. Obviously you can taste the wine in this place as well.

The gourmets will appreciate the local cuisine and will be certainly happy to go to taste some of the Greek specialities to a restaurant or taverna. Thanks to the rare microclimate as a result of the volcanic activity on the island, the agricultural products are completely ecological, without chemical additives, and they have their characteristic taste properties as as the local ground is rich in minerals, Some of the well-known island products are especially the cherry tomatoes, peas, and a delicious and very sweet watermelon.

Where to go to Santorini?

Tips on a hotel in the area Santorini 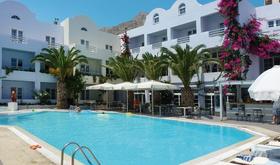 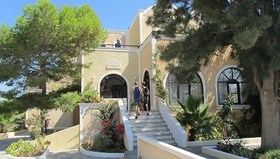 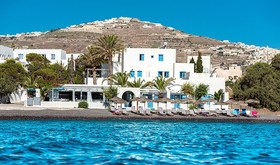 Sigalas Aparthotel from 23 030 Kč with all the fees 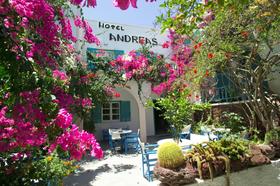 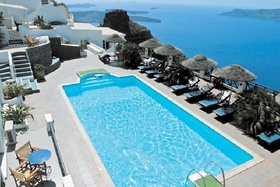 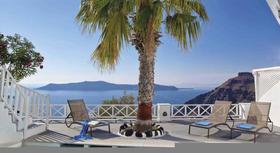