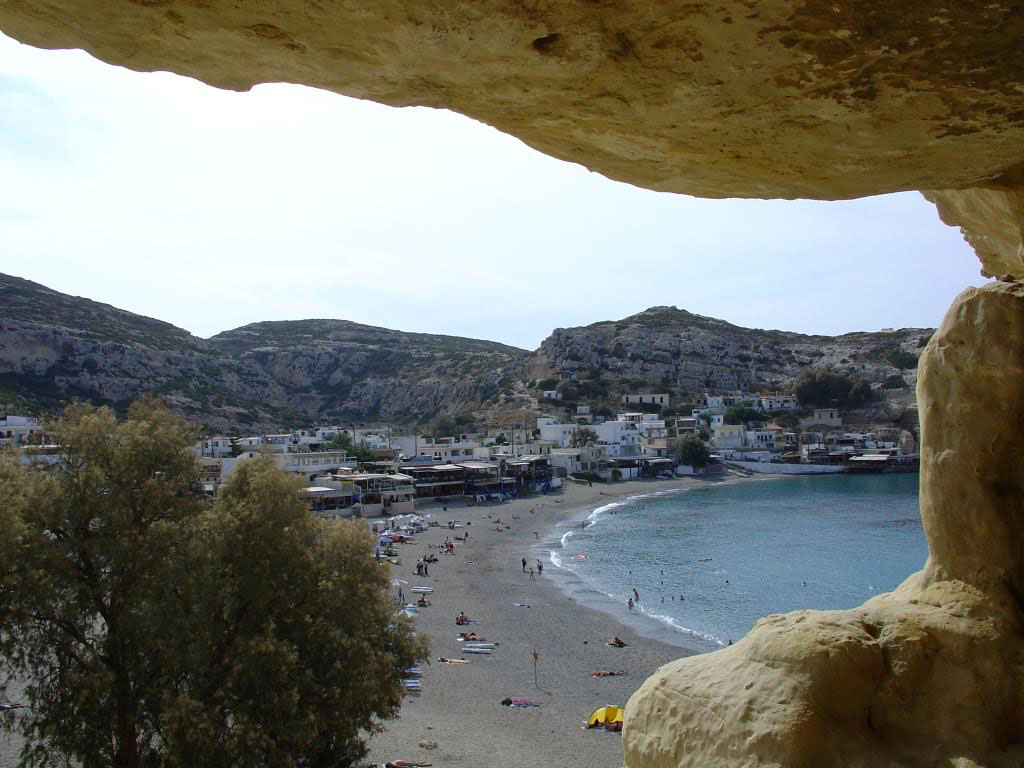 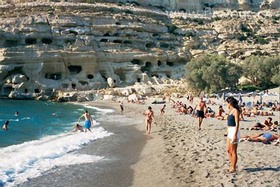 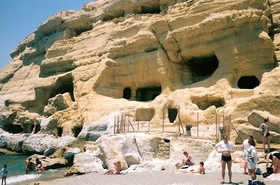 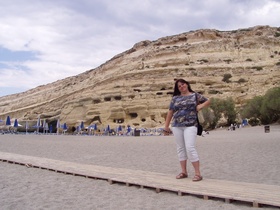 the Evaluation of the helping others travellers. If you have already visited Matala, we will be very grateful for your opinion.

The current offer of hotels, apartments and studios

In the south of Crete in a 250 m wide bay in the shape of a U, you will find a calm and peaceful resort suitable for all including families with children - Matala.

Despite being popular and so frequently visited, Matala has preserved the atmosphere of an original Cretan village. There are two reasons for that - the first one is that there is only one way leading to the resort which finishes there, and so, there is no traffic, and the second is that both in the north and the south of the place, there are rocks protruding 300 m to the sea, thus providing a natural protection against an excessive growth.

Matala resort is divided into two parts - north Matala offers calm sunbathing, a great amount of green vegetation and trees providing shade, where you can cool down and enjoy being alone. South Matala is covered with small hotels, pensions and tavernas, offering a nice sit-down and refreshment right on the beach (or close to it).

The romanticism of the resort is further enhanced by the walks through the old part of the village, including narrow streets, small tavernas and sitting in a dim light.

For those who are interested in history, there are plenty of sites to be visited in the resort. In the rock rising above the village in the north and protruding 300 m to the sea, you will find a great number of artificial caves that were formed already in the Neolithic. During the 1st and 2nd century, those caves served as burial sites, later as dwelling of the lovers of alternative ways of life - in 1969, a conference of the supporters of the hippie movement took place in Matala who lived in the caves for some time, yet later they were forced to leave from the whole area.

During the Minoan era, Matala was a port for Festos which perished together with Kommos and other Minoan edifices in the location. During the Roman era, Matala was reconstructed as a port, this time for the town of Gortys that was declared the Cretan capital of that time. It was also the cream of the Roman society that had their villas and sumptuous residences in Matala. The remains of the old settlement are well visible on the sea bottom till nowadays.

According to a legend, the cave called Brutospeliana can be found in Matala, that is said to have been a favourite place of the Roman general Brutus.

There is one of the main roads leading to Matala from Heraklion: drive in the direction of Gortys, then continue to Mires, turn left to Pombia and continue to Pitsidia. The road is very well signposted. If you drive from the north, there is a main road from Rethymno (see the roadmap) on which you should continue up to Mires, and then follow the same way like when arriving from Heraklion. The Matala resort is also very well accessible by public buses.

The Matala resort is located on the south coast of Crete in the Messary bay approx. 75 km south-west of Heraklion. The whole area is located approximately in the middle of the west-east axis. For more distances, see the link.

Tips on a hotel in the resort Matala 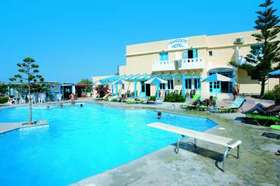 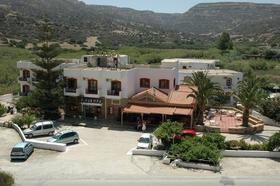 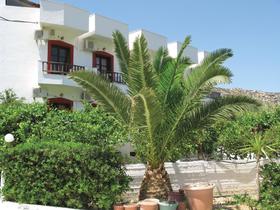 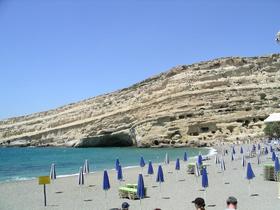 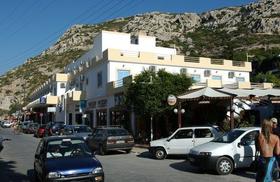