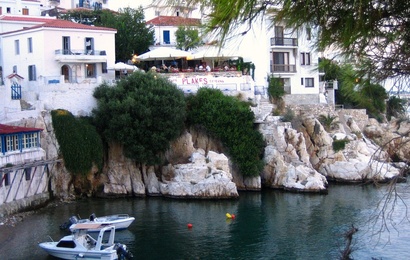 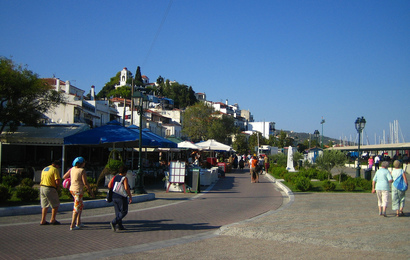 A very popular and frequently visited island of Skiathos is lazing around continental Greece, preparing for the invasion of new holiday-makers every year wanting to enjoy at least a bit of its charming beauty. Geographically, Skiathos belongs to the Sporades archilepago together with Skopelos and Alonissos, located in the northern waters of the Aegean Sea. Its picturesque character can be also evidenced by that fact that the island was chosen as an ideal scenery for the shooting of the popular musical Mamma Mia. Given its popularity among hoiliday-makers, Skiathos is very well adapted to tourism.

Despite its small area of only 50 km2, length of 12 km and width of 6 km, and the largest road of 17 km, it offers enough opportunities both for relaxation and rest, but also for hiking, cycling and other activities. The main resorts with the most beautiful beaches are concentrated along the south, south-west and south-east coast, while the north is characteristic with its mountains with pine forests and many churches and monasteries. For detailed on the island climate, see Skiathos: Weather.

There is never enough information about Skiathos Island. And who would be more familiar with the island than those who have spent there their holiday? We would like to ask you to dedicate a few minutes of your time evaluating your holiday on the island, telling us what you liked there and what Skiathos means to you, or possibly also to give us tips and advice that could be useful for other visitors who are interested in the island and are thinking of going there for holiday.

Our user Miška wrote about Skiathos:

We visited Skiathos last year, it is a marvellous island of friendly people. The port town is beautiful and so are the beaches. We also liked the resort where planes were landing just above our heads. I really like the country and the next year we are going there again.

What to do on Skiathos?

In the east of the island, the capital of the same name (also called Chora by the locals) is located in a charming bay, being a port at the same time. There is an international airport nearby, Papadiamantis, ensuring fast transport between the territory of the island and continental Greece. The town of Skiathos is built in a cascade on a slope like most other ports of Greek islands. The little houses with white facade are arranged one on the top of another, decorated with red roofs. Everything is complated by green vegetation, colourful flowers and a line of yachts along the coast. In the town’s catering facilities, you can taste something of the delicious Greek cuisine but also order a continental meal.

In the disco clubs, you can have fun all night long listening to music to different genres and enjoying some of the tasty drinks. For an overview of more places of interest, see the sections Natural places of interest, Museums and historical sites, Monasteries and Tourist resorts.

If you are interested where to find all the place on Skiathos and how to travel on the island, see the Map of Skiathos Island.

Skiathos is an island visited mainly for fun and beaches. If you are searching for peace, this probably won’t be the right place. Yet if you are yearning for all-day water pleasures near the coast, followed by relaxed sunbathing, building sand castles and having fun till the early morning hours, then you are on the right address. You can enjoy all that in local resorts and beaches. The whole island has more than 60 bays and beaches, mostly covered with fine sand and suitable also for less experienced swimmers and children. Unfortunately they are often overcrowded with holiday-makers. The most famous and most beautiful beach of Kiathos is said to be Koukounari. The mosaic of turquoise sea, long goldish beach and deep green hills is truly impressive and unforgettable.

Other interesting places are Agia Eleni (near Koukounari), Agia Paraskevi (a beach offering a variety of water sports), Achladies (a beach that can be easily accessed both by land and sea), Banana (a beach with a shape resembling a banana), Ftelia (a sandy beach with clean water, umbrellas and deckchairs), Kalamaki (a beach boasting esspecially clean water and a beautiful scenery), Kanapista (a windy beach), Kolios (a beach with clean water suited to water sports), Lalaria (a beach that can only be accessed by sea), Maratha (a small but charming beach), MegaliAmos (an easily accessible and well equipped beach), Megas Gialos (a small beach with white sand and high rocks), Platanias (a beach with a small church and a range of services), Troulos (a beach with goldish sand and exuberant green vegetation), Tzaneria (a nice beach including all the equipment, well accessible), Vassilias (a beach said to be surrounded by the most beautiful nature on the island), Vromolimnos (a very long, almost endless beach offering a variety of water sports) and Xanemos (a bude beach). For a complete overview of beaches, see the menu on the left (List of sites, or you can also see the section Skiathos beaches

How to get to Skiathos?

The fastest and the best option to get to the island is by plane. Skiathos has its own airport, Skiathos Airport ΄A.Papadiamantis΄. If you want to use your own car, buy tickets for a ferry. The regular lines depart from Thessaloniki, Volos or Agios Konstantinos. If you leave your car at home, you can use some of the local line buses that will take you exactly where you need. Obviously there also taxi services and sightseeing boats. Skiathos is also well connected to the other islands like Skopelos or Alonissos - the journey takes about an hour (or approx. 20 minutes on a faster hydrofoil). Besides the nearby islands, you can also use the boat connection to other Greek regions, since Skiathos is connected with Thessaloniki and the islands of Ios, Syros, Naxos, Paros, Santorini and Crete. it can be quite time demanding though - for example, the travel from Skiathos to Heraklion on Crete takes 24 hours.

While the coast is very lively and always crowded with tourists, further in the interior, you will find unspoiled nature. Pines groves, vineyards, olive orchards and an incredible peace, only disturbed by cicadas. And so, despite its continuously increasing popularity, Skiathos Island has managed to presrve its natural beauty and create a perfect symbiosis of commercial tourism and heritage of its ancestors.

Skiathos is a bit specific for that you can find there only one decent road, leading from the southern coast and connecting all the resorts and beaches from the west to the east, or more precisely everything starting from the town of Skiathos to Koukounaries - see the Map of Skiathos Island. The buses depart every few minutes (20 - 30 min). Sometimes there is also a bus to the north to the Evangelistria monastery. The intervals are shorter though: 45 min in the mornings and evening, and 3 hours during the day. If you want to travel the island independently, you can try some of the car hire services.

The offer of tours to Skiathos is not very large. If you are searchinf for a tour, take a look at the section Skiathos: Tours centre.

What more places can you visit?

Tips for hotels, suites and studios

Here are a few tips for hotels and other kinds of accomodation on Skiathos Island. For a complete overview, see the section Hotels, suites and studios on Skiathos.

Tips on a hotel in the area Skiathos 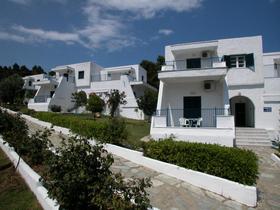 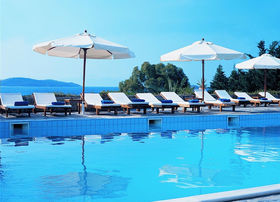 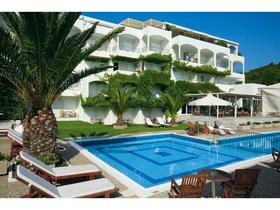 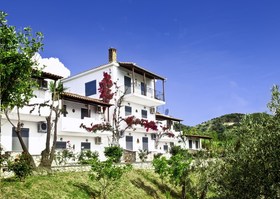 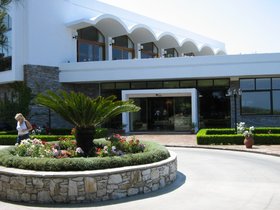 Skiathos Palace from 35 871 Kč with all the fees 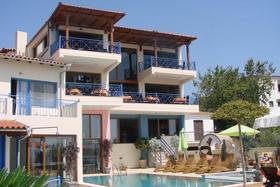