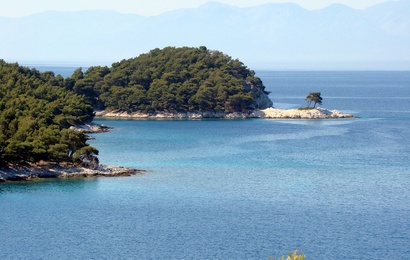 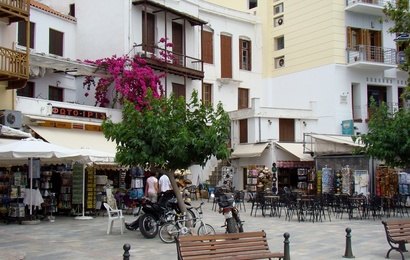 The charming little island of Skopelos, located near continental Greece and pertaining to the Aegean archipelago of the Sporades, together with Skiathos, Skyros and Alonissos, is allegedly the greenest of all the Greek islands. The majestic rocks, densely covered with pine forests rising to great heights, grassy plains divided by white paths, picturesque valleys of plane trees and colourful vineyards together with the orchards of almond, olive and other fruits trees impregnated with the heady scent of the flowers and fruits, all is a clear evidence of this fact. If you are interested more in island climate, see the details in the section Skopelos: Weather.

What to do on Skopelos?

Although Skopelos is the second largest island of the Sporades with its length of 45 km and the width of 12 km, suprisingly it doesn’t belong to the most visited ones, and so, it is not so much affected by tourism as we know it from other Greek destinations. Despite that, it is equipped well enough to satisfy the demands of all its visitors.

A great part of the island is mountainous, with the two highest peaks of Delfi and Palouki  exceeding the height of 500 m, yet especially towards the island interior, fertile lowlands are not exceptional either. The dense forests are hiding many secrets that can be a motivation for adventurous trips for the curious ones. You can encounter adorable surprises like a small church or monastery - on the small area of the island (only 93 km2), there are about four hundreds of them, with one quarter located in the capital. The most famous ones are the basilica of Agios Athanasios in the capital town, built on the place of the original temple of Athena, the Evangelistria Monastery resembling a medieval fortress, or the lofty monastery of Agios Ioannis Prodromos with many nuns living there till nowadays.

There is never enough information about Skopelos Island. And who would be more familiar with the island than those who have spent there their holiday? We would like to ask you to dedicate a few minutes of your time evaluating your holiday on the island, telling us what you liked there and what Skopelos means to you, or possibly also to give us tips and advice that could be useful for other visitors who are interested in the island and are thinking of going there for holiday.

The capital town of the same name, sometimes also called Chora or Hora, is the main port and at the same time an administrative, cultural and trade centre.

The island has no airport, and so, the town will probably be the first place you will see when arriving there on a boat or ferry. Prepare yourself for a truly unforgettable experience: A mosaic of adorable houses built on a green slope in a colourful cascade of white facades and red roofs will unfold before you. The narrow streets and corners with staricases, small balconies and flowers invite for romantic walks and soaking up the local atmosphere. When you climb to the very top and take a breath, you will be rewarded by a view on a charming little church of Agios Athanasios and the remains of the city fortifications and the castle called Kastro built by Philip of Macedon in the 4th century BC. With the town’s position on a hill, a magical view on the port and the sea will unfold before you. And like in every island capital, here you will also find many tavernas, bars, music clubs, but also different shops.

The second largest town on Skopelos, Glossa, is located almost on the opposite western coast of the island. Together with its port of Loutraki, it is just as beautiful as the capital, although it has only a half of its inhabitants (the population of the capital is 3 thousand, while Glossa has only 1.5 thousand inhabitants). You should definitely try the local delicious cuisine, especially seafood dishes and fish, goat cheese and the traditional wine. Like on other islands, you will also find there many historical sites, e.g. the remains of ancient baths, a fortress and the temple of Athena. For a complete overview of the places of interest, see the List of sites in the menu on the left - you will find there an overview of Tourist resorts, Hotels and the Museums and historical sites.

If you want to know where all the places are located, see the section Map of Skopelos Island

You can find most travel agencies and tours here in Skopelos: Tours centre. The tours can be purchased with one of our special bonuses (a discount, a travel guide or a map), but some travel agencies also offer a discount for an online reservation or have different offers that couldn’t be included in the price list. Therefore it is highly recommended to see also the offer of the travel agencies listed in the Recommendation of a Travel Agency chart. You can find a complete overview of the hotels, suites and studios offered in the destination in the section Hotels, suites and studios.

Many of the Skopelos beaches offer all the standard comfort of summer resorts, including umbrellas, deckchairs, refreshment shops, water sports and other attractions.

Yet you can still discover the unspoiled nature of the secluded places where you won’t find a single footprint. The best is to rent a boat and set off to explore the coast, getting surprised by the picturesque sunlit bay, green vegetation, and the azure blue sea water and a sandy or pebbly surface of the beaches. The largest and reputedly the most beautiful beach of Skopelos is Milia in the north of the islands, close to another resort, Panormos. It is well equipped and has quality refreshment, umbrellas and deckchairs. Other popular beaches are Adrina, Agnonda, Armenopetra, Elios, Glyfoneri, Glisteri, Hovolo, Kastani, Limnonari, Loutraki, Panormos, Perivolou or Velanio. For a complete overview, see Skopelos beaches.

In antiquity, the island bore the name of Peparethos. Some of the oldest archaeological findings on the island that were discovered mainly in the surroundings of the Stafylos Bay, are dated back as early as 1400 BC, pointing out to strong Mycenaean influence. The used to include a few buildings and a grave, apparently belonging of the then wealthy ruler of the island. During 6-5th century BC, Peparethos was flourishing, minting its own coins and trading actively with the whole Black Sea. The today’s name of Skopelos is dated back to the 2nd century BC.

For an overview of hotels, suites and studios, see the section Skopelos hotels.

Where to go to Skopelos?

How to get to Skopelos?

If you are not flying with a travel agency, it is not so easy. As it was written above, Skopelos doesn’t have an airport, so, you need to fly to the neighbouring island of Skiathos and then continue by a ferry, which takes about an hour. Besides international flights, Olympic Air have their flights from Athens and Thessaloniki. If you opt for a ferry, again there are no international lines, only domestic ones, with direct connection from Thessaloniki, Agios Konstantinos and Volos. Skopelos doesn’t have a direct boat connection with Athens (the port of Pireaus) but it is possible to travel on a ferry from Skiathos, Alonissos, Ios, Syros, Naxos, Paros, Santorini and Crete.

Tips on a hotel in the area Skopelos 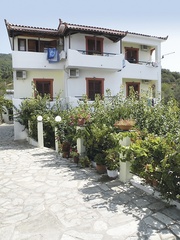 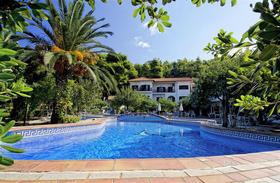 Delphi Aparthotel from 14 398 Kč with all the fees 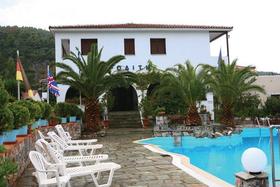 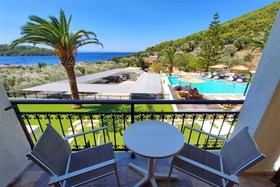 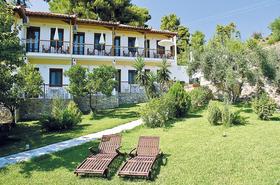